During a recent workshop, a participant confessed his lack of empathy – a core dimension of emotional intelligence. He said, “I don’t have any, and I don’t know how to begin to think about feeling the way others do.”  Given the laughter and head nodding from the others in the room, he was not alone.

For some business leaders, empathy is a luxury they think they can’t afford.  They don’t see the value in making employees feel good about themselves. They view it as an indulgence born out of the “everybody-gets a trophy” generation, rather than an effective way to manage people.   But many experts place empathy high among the traits of an effective leader. It is also the fertile ground in which innovation and growth can germinate.

To my workshop participant’s surprise, I told him he could amp up his capacity to empathize.  I offered simple things he could do to understand the emotions and behavior of others.

I suggested that he start by regularly looking at situations through their eyes, not his own.  When a situation arises that he suspects calls for empathy, I proposed that he say to himself, “How would I feel if I was in this person’s situation, facing these same circumstances?  What might be my perspective?”

I invited him to walk, even if briefly, in the other person’s shoes and, from their vantage point to see if he is better able to understand their feelings, actions and reactions.

If more empathy would increase your effectiveness, make a conscious choice to look at situations from the perspective of the other.  Successful leaders know that power comes from listening to and relating to the people who report to them, those to whom they report, as well as their clients and business partners.

And as a bonus, empathetic listening not only increases productivity, but when you open your mind to what others feel and say, you just may unlock the door to creativity and innovation. 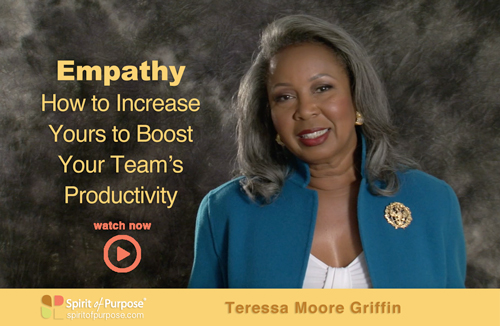