A researcher in Switzerland has proven something some of us already knew. Generous people are happier. Those who are concerned about the well-being of their fellow human are happier than those who focus only on their own advancement.

You don’t have to be a self-sacrificing martyr to get happy. Professor Philippe Tobler studied the brain activity of subjects who were contemplating a generous act. The study focused on three areas of the brain associated with generosity, happiness and decision-making while subjects were deciding to behave or not behave generously. There was a noticeable difference in how the three areas of the brain interacted when the subject decided to act altruistically.

More research is needed to determine whether generosity for the sole purpose of producing happiness works. But if you’re authentically generous, you’re already benefitting. 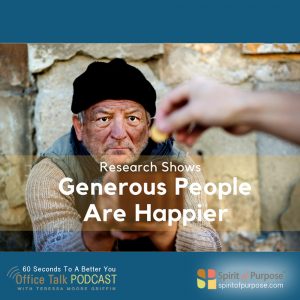