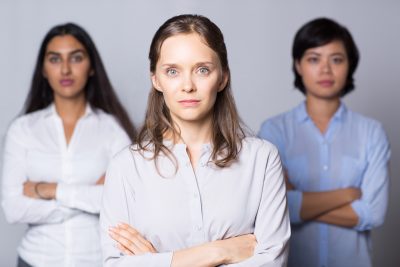 It can be particularly challenging for women to call attention to ourselves in ways that grab the attention of those higher up in our organization.  Many of the women I work with and speak to think keeping their heads down and working hard should be enough to get noticed and promoted.  But unfortunately, all that hard work has done little to hoist them up the company ladder.

A recent study by LeanIn.org and McKinsey & Company concluded that at the current rate, it will take women over 100 years to achieve c-suite equality.  Even though women enter the workforce at equal rates to men, their paths split.  Men are more likely to advance to positions that lead to the c-suite, while women disproportionately end up in roles that don’t.  They also found a difference in perception at the top.  Human Resources and corporate leadership say diversity is a priority, yet down the line, lower level managers don’t see it that way.  The problem is that these are the people who determine who among their team gets promoted.

Other factors include implicit, unconscious bias by leadership, and the unfortunate fact that women receive less feedback than men – even when women ask for it.   Managers aren’t even aware they’re behaving differently.  They reported that they give men and women feedback equally, but evidence shows that women are 30% less likely to be told where they stand.

So, if you’re finding it hard to get the boss to notice and acknowledge your accomplishments, changing that means no longer relying on working hard to get noticed.  Your glass ceiling will only begin to crack if you take deliberate actions that earn the attention and respect of those in position to promote you.

So where do you begin?   A recent Harvard Business Review article offers suggestions for earning the boss’ respect.

First, clarify your responsibilities.  Make sure the projects and tasks you’re working so hard on are the things your boss values.  If you’re not sure, ask how you can serve him better – which will very likely mean taking on more responsibility.  Find out what you need to learn and how you can learn it quickly.  Then, diligently, get up to speed.

Adapt your communication style.  Find out how your boss would like you to communicate with her and adjust your style to match hers.  Does she prefer detailed written or in-person reports at the end of a project, or brief updates all along the way?  Does he like lots of numbers and specifics, or would he prefer a top-level overview of your progress?  Maybe he just wants something he can cut and paste into his own report to his boss.

Build trust by observing and empathizing.  No matter what your role, the work you do feeds into your manager’s overall goals and objectives.  Seek to understand his priorities and what matters to him.  What’s she being evaluated on?  How can you present what you do in ways that shine a positive light on her performance?

Build relationships with others, across levels.  It’s important to build trusted networks within your organization – even if you don’t need them in your current position.  It demonstrates that you fit well into the team.  And, more importantly, your boss is not only observing you.  She is taking in feedback from others.  What her peers and co-workers think of you matters.

Ask for feedback to find out what you can do more or less of.  According to the Leanin.org and McKinsey study, male and female managers hold back on giving women honest feedback.  The study doesn’t indicate why, but my experience is that they’re anticipating an emotional reaction that they’d rather not deal with.  So if you’re going to ask, listen with your professional ears on.  Listen to learn.  Listen to understand how you can serve your company better – and in the end, serve yourself better.  Take whatever measures you must to avoid defensiveness or reacting emotionally.

Finally, reflect.  Look beneath the surface of any interactions or comments that don’t feel so good.  They might happen in a feedback session or as you’re going about your regular workday.  There is likely something there to learn.  This could be a signal that you need to change your behavior, your dress, your focus or another limitation that the leadership in your company quietly views as a career killer.