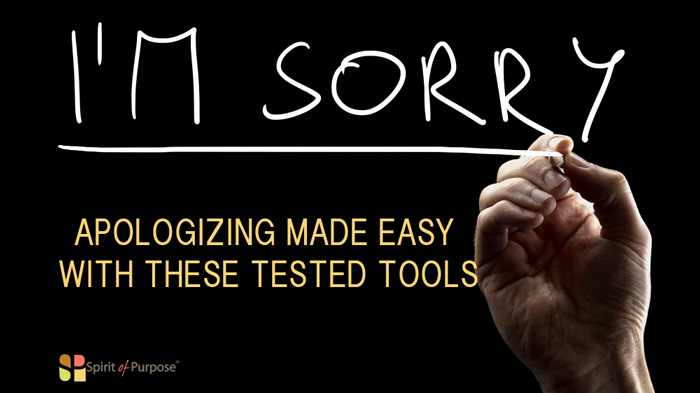 Have you ever wondered how best to say you’re sorry after making a big mistake or unconsciously doing something that generates unintended negative consequences?

According to Psychology Today, for an apology to be effective, it must focus on the other person’s needs – not your own. Too often apologies are ineffective because we’re trying to make ourselves feel better rather than the person who we’ve let down – which is often why politicians, athletes and celebrities who are forced to apologize come off as insincere.

Researchers at Ohio State & Eastern Kentucky Universities have determined that there are six components that make up an effective apology.  Roy Lewicki, the lead author for the study, and professor emeritus of management and human resources at Ohio State University’s Fisher College of Business, says, “apologies really do work, but you should make sure you hit as many of the six key components as possible.”

Apologies containing these two elements were seen as the most effective, credible and adequate.

Admitting mistakes is difficult for many. It can be painful to accept our own failing or weakness – our own humanity.  But, that’s where our growing edge lies. Digging our heels in and refusing to admit wrongdoing, or unintended impact, is our internal border patrol hard at work convincing us that if we admit our mistake, we’ll be seen as unworthy or inadequate. Yet, just the opposite is true. We demonstrate personal integrity and strength when we offer a sincere apology.

The next three components of an effective apology, as cited in the study, were:

Lewicki says the final element – asking for forgiveness – was viewed as least important to study participants. He says, that’s the one element you can leave off if you’re pressed for time. I understand his point and I differ, particularly when the situation is sensitive or emotionally charged, such as during cross-cultural communication, or when the stakes are high. In such instances, asking for forgiveness can be a potent ingredient that helps to diminish the intensity of negative feelings and facilitate a complete letting go.

Since no one is immune to mistakes, this is information that you need to move past inevitable mishaps and missteps.

Remember, the next time you need to say you’re sorry, include as many of these proven apology components as possible. Lead with admitting you made a mistake and offer to rectify it.