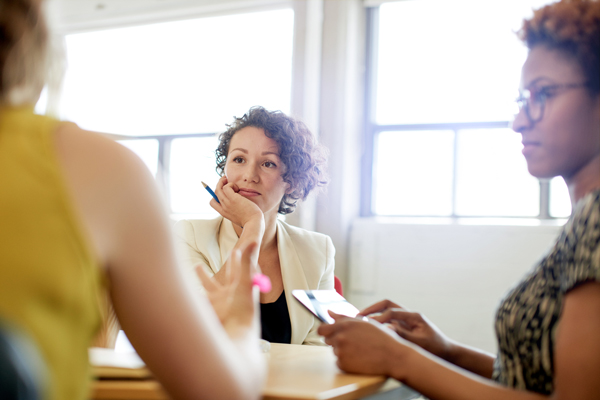 In a recent HR Magazine Q&A with Edward Hess, author of “Humility is the New Smart, Rethinking Human Excellence in the Smart Machine Age,” he says, how well employees learn continuously and relate to others will become the great differentiator.  He points to increasing automation and cheap, (or often free,) access to information.  The traditional model of “smart” has become obsolete.  Knowing a lot of stuff is becoming less important than critical thinking and the ability to emotionally engage with others.  These are two things machines can’t to do.  Therefore softer skills will factor more and more into an organization’s success.

In my estimation, this notion is another sign of the advancing age of the feminine work philosophy.   The authoritarian, masculine leadership style is giving way to a more empathetic and engaging approach that is proving to be profitable and effective.   A 2016 New York Times article about this very topic cited a study by the Peterson Institute for International Economics.  According to the institute’s director, Marcus Noland, “An increase in the share of women from zero to 30 percent would be associated with a 15 percent rise in profitability.”

Is it time to institutionalize humility?  For some, the words “humble” or “humility,” may conjure up images of being a doormat, or of being easily taken advantage of by bosses or co-workers.  But that is not what I’m talking about.  Humility is about understanding and appreciating that you don’t have all the answers.  It’s about listening more and talking less.  It’s about nurturing a team so it performs at its best.  And recognizing when it’s time to adjust the plan rather than stay the course because you can’t admit you’re less than perfect.

Humility is about being flexible and responsive.  It’s about skillfully navigating crisis or being adept at problem-solving.  The great irony is that the subjugation of women throughout history has given them these qualities in spades.

In contrast, people who prescribe to the masculine way, so called “smart” people with strong egos, tend to be defensive, less flexible and unable to take in critical feedback.  They’re less likely to seek wisdom from others because they fear appearing weak.  They believe it is their job to know it all and to direct others to carry out their vision.  While humble people who are keenly self-aware and receptive to contradictory perspectives are better able to make data-driven decisions and promote collaboration by being empathetic and inclusive.

It may be difficult to believe this notion today, given our country’s current leadership direction.  But often times, it takes a major crisis to ignite transformational change.  And we see that change as more and more women toss their hat in the political ring.  The number of women in high corporate and political places is growing – albeit at what feels like a snail’s pace.

As we march ahead, I urge women at every stage of their career to embrace their feminine style.  It is what sets us apart, and what will drive the nature of business in the future.  Research is proving that the rules have changed.  We should no longer feel compelled to use the blustery, dictatorial tone of our male counterparts.  Admittedly there are women who owe their success to mastering that masculine style.  But, most women say they’re uncomfortable with having to behave in ways that run counter to who they really are.

The age of the feminine workplace will not come without a fight.  Today’s powerful people will hold on to their influence with all of their might.  But now we know becoming one of them isn’t the answer.